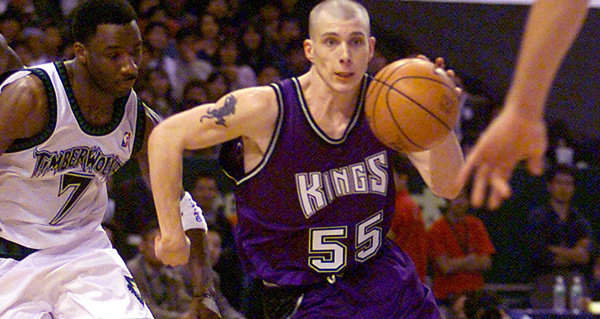 It’s probably not a coincidence that the Kings started contending in earnest after they traded Jason Williams away to the Grizzlies. Mike Bibby was the better player, and he was steadier, which was crucial for a team that had a tendency to lose control of games down the stretch. Rick Adelman built that free-flowing offense to run clean and smooth for about 45 minutes, and Chris Webber didn’t want the ball in big moments. Williams sat out a lot of fourth quarters, in Adelman’s doghouse after tossing a few would-be highlight reel assists behind his back and into the laps of courtside fans. You could count on Mike Bibby. He played like a practiced debater speaks.

But White Chocolate was alive, tripping over his own ambition as he occasionally would. This is not kind memory: Williams tried stuff on an NBA court that nobody had ever tried before. He tossed familiar basketball vocabulary into a blender. A no-look, behind-the-head jump pass. A 360 finger roll. A fake one-handed push pass that somehow segues into a pull-up jumper. He once hit Raef LaFrentz on the break with an elbow dime.

Williams built an entire, genuinely effective game out of what other players messed around with in practice. He took it seriously, all the way back to his high school days: “I had a key, and I would go [to the gym] for two or three hours most every night and never even take a shot. I would just throw the ball against the wall every which way, over and over again.” It would have behooved him spend more time honing his shot—his confidence in his jumper didn’t line up with his shooting percentage—but then you wouldn’t ask Haneke to make an action movie. Williams was an artist working in a particular aesthetic. Becoming a more well-rounded player would have made him less like himself.

Audaciousness is something only stars are celebrated for. Allen Iverson driving the lane with skin that’s as bruised as it is tattooed. Steph Curry uncorking a three from the parking lot. Lesser players who regularly attempt what’s beyond them—your J.R. Smiths, your Larry Hugheses—become sources of frustration. This is understandable; your base fan brain wants to see your team win, and when somebody on the court in your colors is doing things they absolutely don’t have to do, and it’s resulting in turnovers and clanked shot attempts, you get upset with them.

This explains how Williams ran out of support in Sacramento. He was a rookie sensation because we always celebrate what rookies do well, but his questionable decision-making and unsteady defensive effort were remained problematic throughout his second and third seasons. Adelman would bench him, then toss him back out into the action to make the same mistakes. If Adelman had a weakness as a coach, it was instilling meaningful discipline in his players. It’s unclear if Williams learned much from the hundred times he got yanked from the floor. Hey, don’t have done that is not really a critique you can address. Adelman was unable to teach Williams how to reform his game, so he just kind of didn’t. It wasn’t a testy relationship—Adelman loved Williams’s inventiveness and encouraged it in many ways—but it wasn’t a terribly productive one either.

Williams cratered in his third year, losing minutes to Bobby Jackson and seeing his scoring average dip into the single digits. Meanwhile, the Kings were travelling in the opposite direction. Chris Webber assembled the finest statistical season of his career: 27.1 PPG, 11.1 RPG, 4.2 APG. Peja Stojakovich started playing like a star at age 23. Vlade Divac was still hanging on in his late prime. The Kings won 55 games, made the second round of the playoffs, and for the first time in the Adelman era were a truly good team in addition to being immensely fun to watch. Things were about to get serious, and Williams wasn’t viewed as a serious player. Hence the move for Bibby, which was shrewd, if also a little bit discouraging.

Williams had a nice handful of years with the Grizzlies—as we explored earlier in this series, he and Hubie Brown found each other at the right time—and he even won a championship with the Heat at age 30, when his knees were creaky and he didn’t dare freelance much with Shaq and Dwyane Wade demanding the ball. But there looms over his career what he might have been able to accomplish if Sacramento had kept him around. It says something about the magnificence of his style that he’s synonymous with that era of Kings teams despite the fact he wasn’t around for the best ones. You could easily misremember for a moment that he was one of those demoralized faces walking away from a blown whistle in Game 6 of the 2002 Western Finals—but no, his spectacularly inconsequential year with the Grizz had long since ended by then.

There is precious little space, at the highest level of competition and especially on the best teams at that level, for panache. This isn’t to say that NBA action is robotic, but the tired jazz metaphor is inapt—there is simply not that degree of experimentation and openness. Coaches are worried about getting fired and players are worried about losing games and money. You try to win everything, and put up the strongest numbers you can, and when that’s your chief concern—as perhaps it should be—you don’t often attempt wild maneuvers just to see if they come off. That’s seen as reckless and selfish. But put another way, isn’t it an innocent fascination with something other than what everyone else is so narrowly focused on? It’s a different understanding of the game. Where others saw rigid schematics, or a problem to be solved, a young Jason Williams saw a blank space in which to express himself.

This is not precisely the player you want bringing the ball up in crunchtime for your title contender, but it is the player Williams wanted to be, a vision that he realized, the broad mythic figure that outlived the actual athlete. He’s been retired for a while now, and the Williams that’s eternal is not the chastened one on the Grizzlies or the broken down yet successful one in Miami, but the maestro in purple and black, dancing down the court without a plan, about to do whatever comes to him, whatever feels coolest. Some of this has been preserved on YouTube. What’ll he do next? With the benefit of hindsight, we already know. And yet, when you revisit the footage, no matter how many times you’ve seen it, he still surprises.