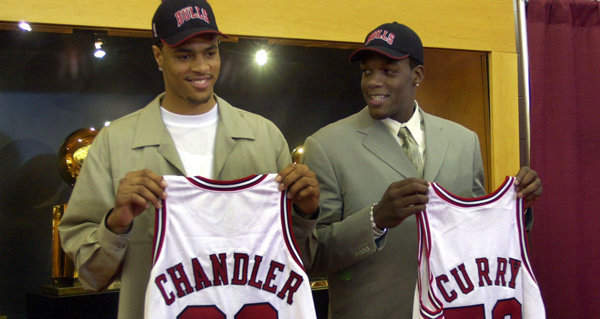 In 2001, the Bulls traded away Elton Brand for the draft rights to Tyson Chandler, took Eddy Curry fourth overall, and declared themselves a project. Jerry Krause, struggling to apply his ample genius following the dissolution of Chicago’s dynastic 90s core, was basically trying to copy the San Antonio Spurs, who had won a title two years earlier with a young Tim Duncan and an aging David Robinson. This was also when Kevin Garnett was growing into a perennial MVP candidate and Shaq, operating at the very peak of his powers, was dunking opposing centers directly into the grave. The plan was bold and high-risk, but it made sense. What if the Spurs could flank Duncan with a Robinson-like talent his own age? What if Curry could approximate Shaq’s forceful low post game and Chandler could dominate defensively like K.G.?

Naturally, the Bulls decided Tim Floyd was the man to steward the development of two exceedingly raw teenagers. These days it’s pretty common for a rebuilding organization to hire a teacher-like head coach, somebody they think has the proper temperament for dealing with young players who require more instruction and patience than your average 30-year-old vet. Floyd was neither that kind of coach nor was he inclined to be, considering he was coming off three abysmal seasons in which his teams went a combined 29-and-169. He didn’t have time for rookies. In a desperate bid to make the playoffs and save his job, Floyd barely played Chandler and Curry, giving many more starts and minutes to Brad Miller and a 38-year-old Charles Oakley.

This obviously didn’t help Tyson or Eddy, but hilariously, it didn’t help the Bulls win either: they started the year 1-and-12. Floyd, panic personified by that point, tried to blame the young big men he kept strapped to the bench for the team’s lack of success. This put him at odds with Oakley, who made a habit of calling the overmatched coach out on his nonsense. After a particularly embarrassing November loss to the Timberwolves, Floyd claimed that his team quit in the middle of the game. Oak spat back: “if Tim challenged our effort, you have to challenge the way he does things too. He makes the lineup changes every day.” He continued: “if we're not trying to win or get to the playoffs, we might as well just play young guys and sit everybody else on the bench and get blown out by 50 every night.” He was fined $50,000 for those comments, in part because they were stingingly true. Floyd was flailing; it was unclear what he was trying to accomplish. “Every day has been hell,” he told the press in early December. By Christmas, he was out of a job.

Floyd’s replacement was Bill Cartwright, an assistant Krause elevated in large part because he thought Curry and Chandler would benefit learning from a guy who was a solid NBA center in his day. While the hire had its logic and Cartwright at least granted the young guys more trust than Floyd ever did, Mr. Bill also tried to install Phil Jackson’s triangle, which was tough trig for a pair of players just getting their professional feet wet. “It was so painful,” Jay Williams told Jonathan Abrams in 2012. “To bring a kid in from high school who never had to run such an intricate style of offense, it was difficult to ask that.”

Of course, Williams further derailed the Bulls’ rebuild in the summer of 2003, when he got in a career-ending motorcycle wreck. An awesome force in his three seasons at Duke, Chicago took Williams second overall in the 2002 draft. He was supposed to be a franchise point guard who could feed Curry and Chandler. Instead, he ended up having to recover from a shattered pelvis, a severely damaged left knee, and major nerve damage. His professional playing days were over.

2003-04 was a supremely messed up season. The front office, which had been turned over to John Paxson, drafted Kirk Hinrich to replace Williams as the team’s starting point guard. Cartwright started the year 4-and-10 and was fired. Chandler played only 35 games due to two separate back injuries. A 38-year-old Scottie Pippen was kicking around, though he didn’t feature much. A 35-year-old Antonio Davis did get considerable burn, playing 31 minutes per night and routinely starting alongside Curry. Late career Kendall Gill was prominently involved. A completely checked out Jalen Rose was traded away midseason. The offense revolved around a 23-year-old Jamal Crawford, which is like splashing some coffee into your sugar bowl and chugging it. The whole scene was rotten.

Scott Skiles was not the man to fix this, but he did at least, after taking a deep breath over the offseason, provide some order. The Bulls were actually kind of good in 2004-05, making the playoffs for the first time since the Jordan days. They couldn’t score, but Skiles, as he often does before burning a team out completely after a few seasons, whipped them into terrific defensive shape. Chandler was absolutely not Kevin Garnett, not even on one end of the floor, but he started to become the excellent positional defender and rim protector he would be for the next decade. Hinrich was developing into a nice two-way player. Ben Gordon provided some scoring off the bench. And Curry was fine, which is to say disappointing. He moved elegantly in the paint, but he just wasn’t maturing. He was preternaturally timid and always a little bit out of shape. He had a tendency to disappear from games, failing to plant himself on the block and demand the ball. He didn’t rebound well, which drove Skiles nuts. The frustration he caused was starting to outpace his potential.

A 2005 opening round loss to the Wizards is where the Curry and Chandler era ended. The former was suffering from arrhythmia and got in a spat with management about his medical privacy. Before that saga reached its conclusion, Paxson traded Curry to the Knicks for Tim Thomas, Michael Sweetney, a first-rounder and a first round swap. Meanwhile, he seemingly committed to Chandler by signing him to a long-term extension. “I’m ecstatic that this contract is done,” Chandler said when the deal was announced. “To know that I will be in Chicago for the next six years is definitely a dream.” He was shipped to New Orleans the following summer for J.R. Smith and P.J. Brown to create enough cap space to sign 32-year-old Ben Wallace.

And that was that: two potential star big men drafted in 2001 and both of them gone by 2006. A magnificent gamble didn’t pay off at all. We know, looking at the rest of Chandler and Curry’s post-Bulls careers that they probably wouldn’t have become franchise players if they had been drafted by another organization. Curry wasn’t quite competitive enough to thrive in the NBA, and Chandler had some steep offensive limitations. But looking back at their time in Chicago, the situation in which they were supposed to develop into a league-dominating frontcourt could hardly have been less conducive to success, volatile and staffed by incompetents as it was.

In an optimistic 2002 Chris Ballard piece about Tyson and Eddy, there are two quotes that are striking in retrospect The first is Chandler, talking about the front office making moves to improve the roster: “they've done everything possible for us. We can never look back in 10 years and say it's the team's fault if things don't work out. It's entirely on us.” And the second is from Jerry Krause: “there's no road map for this, and we know that. We're trying stuff, and if it doesn't work, we'll step back and reevaluate. Basically, we're winging it."

That explains the era succinctly, doesn’t it? The Bulls were all aspiration and no foresight. They liked the idea of Tyson Chandler and Eddy Curry, but they didn’t think through it—what exactly they would look like together, and how they were going to realize that vision. What unhappily unfolded over five years seemed to continually surprise the very people who were so proud of a plan that wasn’t much more than a daydream. They were along for the ride in roughly the same capacity the two high school kids were when they showed up in Chicago. The experiment flopped for a bunch of reasons, but given the befuddled scientists involved, it’s hard to imagine any way that it couldn’t have.