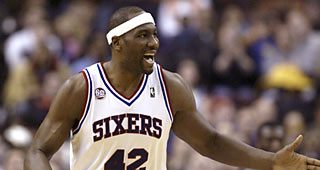 Elton Brand and Baron Davis were friends—the oh, but they were close of the NBA, because you’re never quite sure what it means. Kyrie Irving and Kevin Durant are friends, but it’s unclear how much time they’ve actually spent together. (It is more likely that each one is attracted to the other’s YouTube k-hole profundity.) LeBron James was friends with Dwyane Wade and Chris Bosh before he moved to Miami and it became obvious that, nope, he was only friends with Wade. Baron and Brand met in high school, at a few of those cross-pollinating tournaments and camps that bring the best teenaged basketball talents from all over the country together under the roof of a single Marriott, and they liked each other okay.

The Morris twins have put their money where their identical mouths are in terms of taking pains to play together—and the Suns ended up trading away Marcus regardless—but friendships rarely factor significantly into where players choose to sign. Guys want to win, or they want to get paid, and if they happen to enjoy the company of the people in the place where they can win or get paid, then that’s merely an added bonus. Almost every time we hear about two buddies teaming up because they get along so fantastically, they also happen to be stars. It turns out dudes who are good at basketball have a fun time playing with other dudes who are good at basketball. You tend to have fond feelings toward somebody who can put up 20 and 10 every night.

At any rate, Baron and Brand were friends, and they were both free agents in the summer of 2008. Baron’s Warriors were coming off a bit of a letdown year, narrowly missing the playoffs after their spectacular opening round upset of the Mavericks in 2007. Brand and the Clippers hadn’t had much of a year at all, with the big fella tearing his Achilles during an August workout and returning to action nine months later at the very end of the season, when the Clips were already way out of the playoff hunt. Baron felt like he’d done all he could with Golden State—there was no second star incoming, a midwinter Chris Webber comeback had fizzled rather lamely—and decided to move back to his hometown of Los Angeles, where he could feed Brand in the post and get his burgeoning film production career off the ground.

Or that was the plan. Baron opted out of the final year of his deal with the Warriors and almost immediately committed to the Clippers. Brand was expected to follow suit—cancelling his player option, then signing a long-term deal to stay in Los Angeles—but instead made an abrupt exit for Philadelphia. “It all changed, and I don’t know the reason for it,” Mike Dunleavy Sr. said at the time. Baron was obviously miffed. He didn’t speak to Brand at all after his Philadelphia move was announced and was terse with reporters when asked about it.

Brand was the villain when the story broke, the perception being that he broke his promise to Davis and used the Clippers as leverage to get a richer contract out of the Sixers. The first thing is true, but these were the Clips as owned by Donald Sterling and managed by Mike Dunleavy. They were cheap and floridly incompetent. If you believe at least some of what Brand’s agent David Falk told the press afterwards, Dunleavy 1.) entered into private negotiations with Brand, 2.) low-balled the rehabbing forward, and 3.) was inflexible with some of the contract specifics. In short, the whole approach was disrespectful and Falk was furious that Dunleavy had tried to cut him out of the process. He surely advised Brand to jump ship, and in the end, the Sixers offered five years and just under $80 million, which was five million more than the Clips had ponied up. They could have closed that gap, but sometimes these things are more about your initial offer than your final one. Brand walked because the Sixers made him feel appreciated.

It’s impossible to feel sorry for Dunleavy, a titanically belligerent bozo, or for Sterling, a monster of an entirely different order. Baron Davis’s trust was betrayed, and he lost a friend of some sort in the ordeal, but he also got $65 million to hoop in the sunshine. It was still a good deal.

The funny thing is, neither Baron nor Brand were particularly impactful after signing with their new teams. The point guard lost his fire and spent the bulk of his Clipper career playing with Ray Felton Bod. Brand never fully recovered from the Achilles tear. He wasn’t Young Blake Griffin before the injury, but afterwards he was even more ground-bound, his array of post-up moves noticeably less fluid and his lateral quickness pretty much nonexistent. He and Baron probably didn’t believe they would have competed for titles together, but with Brand in a different phase of his career, in an extremely tough Western Conference, they would have had trouble competing for anything at all.

NBA careers are brief and due to restricted free agency, there aren’t many junctures at which players have a lot of suitors and the autonomy to choose among them. The process of choosing is indulgent and sometimes the outcome seems stupid or unfair, but it’s the player’s reward for putting up with the AAU circuit, the NCAA, and the various NBA provisions that keep them under the thumb of some organization or another until their mid-to-late 20s. If the outcome bothers people—fans, owners, execs, even colleagues—that’s not terribly important. The player has more than earned the right to inflict some collateral damage after being at the mercy of other folks’ decisions for so many years.

And in the end, these moves often don’t matter as much as we imagine they will as they’re happening. Seismic shifts become cosmetic reconfigurations, capital-b Betrayals become curious left turns. Elton Brand went to Philly at the last minute. He had his reasons, and because they were his own, they were good enough. Mike Dunleavy and Donald Sterling suffered a setback; Baron Davis was upset for a while. Nobody really got hurt, because they couldn’t possibly.