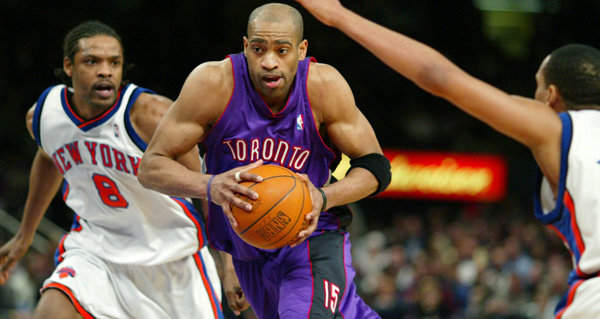 The Toronto Raptors began their first NBA season in 1995. The best player on the roster was a freshly drafted Damon Stoudamire. The second-best was… Tracy Murray? Oliver Miller? It’s hard to say, and even if you can, it’s not worth the effort. Every expansion team is terrible for a while, and more than that, they have very little recognizable talent. When you think about the Lakers, you think about Kareem and Magic and West and Kobe and Shaq. When you think about even, like, the Atlanta Hawks, you can cite Maravich, Dominique, and the medium-accomplished stylings of Joe Johnson, Josh Smith, and Al Horford. Expansion clubs start from zero. They’re just a marketing strategy wrapped around players no other team wanted.

So eager fans develop strange attachments. Stoudamire, who had a career like an arthouse theater that can never quite get its stuff together, remains an object of affection in Toronto despite giving the team two-and-a-half seasons. Only down since ‘95 Raps fans and Syracuse residents have anything to say about John Wallace. It remains theoretical whether or not Reggie Slater ever existed, but you can find hundreds of Canadians who swear that he did. You get the idea. Every fanbase has players that they love and loathe for specific and hard-discovered reasons, but when there is nothing to remember, and your team is only what is happening right now, you are perhaps more acutely attuned to the moment, and the mechanics of Doug Christie’s jumper.

Marcus Camby, the second overall pick in the 1996 draft, was something of a false start. He was a dynamo in his final season at UMass, the only NBA talent on a team that wiped the floor with the A-10 and made the Final Four, but the offensive growth he demonstrated in his junior year didn’t completely translate to the professional level and he proved to be a terific rim protector who had trouble scoring against stronger big men. That wasn’t exactly what the Raptors needed, so he was shipped to New York after his second season.

Vince Carter was the first Raptor who truly stood out. As in: fans of every other NBA team were like shoot, I wish that guy played for us. It took the Miami Heat eight years to get Alonzo Mourning and Tim Hardaway, and eight more after that to get Dwyane Wade. The Mavericks, unless you want to count the highly effective but uninspiring Mark Aguirre, didn’t have a superstar from their founding in 1980 until around the time Dirk Nowitzki started to fill out. The Raps got theirs in year four.

Marveling At Young Vince Carter is its own subgenre of sportswriting, and all of it, awe-chocked and pretty as it may be, fails to capture the serene violence with which Carter operated. It is athletic achievement that exceeds the capacity of language, joy that explodes beyond the denotative meaning of joy and exists only as a vibrating band of light inside you. He belongs to the same evolutionary line as Jordan, LeBron, and Giannis in terms of obliterating previous conceptions of what a human being can do with a ball and a rim.

Torontonians, the people who were closest to the phenomenon, explain it best. Tristan Thompson has called Vince Canada’s Jordan. Longtime Toronto Star reporter Bruce Arthur has said that Vince “taught this city how to love a basketball team.” The Walrus’s Nathaniel Basen on Carter’s legendary dunk contest performance: “the image of him, victorious, strutting towards the camera, became indelible to Toronto sports fans. Carter was mesmerizing.”

There’s a social dimension to this. Basketball at the scale the NBA presents it is performance as much as it is an athletic competition. A crowd of about 20,000 and millions more watching on TV. Because people are solipsistic, and because the action itself is often so absorbing, they are occasionally overtaken by the sense that the game is being staged just for them. (This isn’t stupidity; it is what happens when you’re moved by what an athlete can do with their body.) This goes double for when your favorite team is playing, and what unfolds feels like an intimate dialogue, even though it obviously isn’t. Great athletes who accomplish spectacular feats with your city’s name across their chest become your friends. The relationship is comically thin—they play really well and you make amused noises at them—but the bond is nonetheless surprisingly strong. Sports are like club drugs: they convince you you’re forging a perfect connection with complete strangers.

Vince Carter was the first Toronto Raptor, ever, who made lots of people in Ontario and all across Canada feel close to a basketball player. He belonged to a town that had never before had someone like him to be proud of.

And then he flamed out. Part of the reason we so rapturously celebrate Young Vince Carter is that his next phase was a disappointment. He had some knee problems that reduced his athleticism from generational to exceptional, and he left Toronto on bad terms, checked out and resentful. He peaked at 24. We never got to see his version of Jordan’s first threepeat, LeBron in South Beach, the stage of his career that Giannis is just now entering. Those Nets seasons sucked. By the time we got around to appreciating Vince again, he was 35 years old and a glue guy in Dallas. It was wonderful to watch, but it was an entirely different experience provided by a player whom time had noticeably worn down.

Sam Riches, Canada’s best sportswriter: “I wanted more, just like everyone else. We wanted the Vince that dunked, the beautiful athlete who let us boast, made us prideful just for having seen him do what he did and being able to believe that he did it for us.” Unfortunately, you get whatever athletes are willing to give you, and sometimes less than that, because their bodies betray them in ways they don’t plan for. Vince Carter wasn’t everything Toronto wanted him to be, but he was its first love. Like a lot of first loves, he was both singular and not enough, an uneclipsable unit of measurement unto himself.