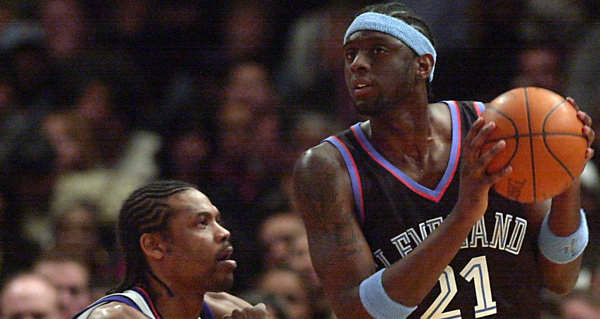 It’s unclear what Darius Miles was supposed to be other than the future, and by the time he got to Cleveland that too seemed like a stretch. He was only 20 when the Clippers traded him away for Andre Miller, and though on paper it was an equal value swap—an All-Star in his prime for a still quite young former third overall pick—it was also a covert tanking maneuver by Cavs GM Jim Paxson. The previous season, Miller’s sharp point guardery combined with the rest of the team’s abject putrescence had conspired to make Cleveland the sixth-worst team in the NBA, which is to say residents of Hell’s worst neighborhood. They selected Dajuan Wagner with the pick they received in the 2002 draft. This just wouldn’t do.

So Paxson pivoted to Miles, who was an exciting player—theoretically multi-positional and screamingly athletic—but not yet a proven or productive one. His career averages over two years came out to 9.4 PPG on 49.3 percent shooting, 5.7 RPG, 1.7 APG, and 1.4 BPG, which was fine for a college-aged player still adapting to the massive leap between Chicago area high school ball and the NBA, but troublingly, Miles hadn’t improved much between his rookie and sophomore seasons. Those averages were the result of laying two near-identical transparencies on top of each other. He was a poor positional defender who chased blocks and a limited offensive player who could slash, dunk, and do nothing else particularly well. With the benefit of modern analytical techniques, we would know now to look at his free throw percentage and see a non-shooter: he was 57.2 percent from the stripe.

Paxson was no roster-building whiz, but he probably knew Miles was more of a gamble than his pedigree suggested, and most importantly, that he wouldn’t make the Cavs better than Andre Miller would have heading into the 2002-03 season, which functioned as a crowded race to the bottom for the right to draft LeBron James. Maybe Miles would come good after LeBron had already been secured, but he wouldn’t set the league on fire in a season Cleveland intended to throw away. The cover of the Cavs’ media guide that year featured twin images of Miles rising for a dunk and Ricky Davis throwing one down. They both missed media day itself—Miles said he overslept and Davis was a ghost. He might not have even been in Cuyahoga County at the time.

Cleveland Browns GM John Dorsey has compared tanking to taking your kid to an amusement park. They see a commercial for the rollercoaster and they get all excited; you park the car and they celebrate; you’re waiting in line and they’re losing their minds… and then as you’re getting strapped into the ride, they start to get scared. The Cavs’ starting lineup in 2002-03—engage the Guy-remembering device!—was: Zydrunas Ilgauskas, a 21-year-old Carlos Boozer, Miles, Ricky, and Milt Palacio. Wagner and Jumaine Jones provided something like scoring punch off the bench. The team started the season 2-and-17. It was a harrowing experience.

Separated from his friend Quentin Richardson and the rest of an ebullient young Clippers squad, Miles cratered, experimenting with a jumper as polished as freshly cut lumber and occasionally trying his hand at point forward, which involved a lot of cool-looking passes that hit defenders directly in the chest. He and Davis were the heart and soul of the team in the sense that they were exuberantly checked out. They would stage dunk contests in the pregame layup line and spent entire games either standing around or attempting wild maneuvers that rarely came off. Ricky Davis’s infamous failed triple-double attempt, where he blew a layup on his own rim just to grab the extra rebound he needed, happened in the spring of 2003. The Cavs’ win that night snapped a seven-game losing streak.

The tank job worked, and nobody would argue now or then that the misery wasn’t worth it, but Miles was a casualty of the proto-Process. At a stage of his career when he desperately needed structure, he joined a team that could control the severity of its own failure and nothing else. Paxson cranked the badness up to 11 and Miles figured that if his bosses weren’t going to care about winning, he shouldn’t either. His potential rotted away. This wasn’t really his fault. You can’t learn to play solid team defense on a team that doesn’t defend, and you can’t learn smart shot selection when all you’re running is doomed isolation sets.

He was in no position to be skeptical of LeBron’s talent, but he was, for reasons of vague knucklehead seniority. “I don’t think you can just bring a high school player in and really just think your team is gonna turn around like that,” Miles told reporters. “If [LeBron] comes, he can just hop on our bandwagon, and hopefully we can do something big.” Unsurprisingly, he didn’t make it through the entirety of LeBron’s rookie year. The Cavs sent him to Portland midseason for Ruben Boumptje-Bounmptje and Jeff McInnis. He had an impressive couple months, signed a big extension with the Blazers, and then went right back to his old ways. His career ended strangely—for the sake of preserving their cap number, the Blazers were trying to keep him out of the league after he missed two seasons due to knee problems—and exactly as quickly as guessed it might if you watched him during that dismal year in Cleveland. Miles was finished by age 28.

He probably wasn’t going to be a star, but as with all lottery washouts, you wonder what Gregg Popovich or Jerry Sloan might have been able to make of Darius Miles, or whether he would have been a mild disappointment rather than a legendary bust if he had joined a team that was more invested in his development than the Cavs were. The reason tanking is so odious isn’t only that it produces a lot of bad basketball, but that it is a strategy that requires everyone involved to endure rather than improve. Do whatever you want, but try not to do it too well. That mindset is poison to a 20-year-old predisposed to screwing around. Nobody did right by Miles, and he didn’t know how to do right on his own. So of course he ended up struggling, foundering, and eventually fading away.