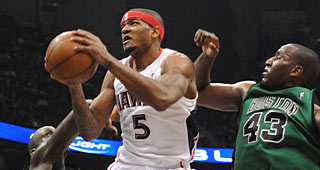 The NBA wants us to call them governors now instead of owners. I like Tom Ziller’s habit of calling them franchisees, as if they were maintaining various McDonald’s outposts. This is just quibbling over shorthand, the word we use for tycoons who make (and hoard) so much money in one industry that they have enough to strongarm their way into the narrow business of basketball, literalizing the team/fan dynamic in the process. The Pistons belong to the city of Detroit, but Tom Gores maintains legal custody. He probably doesn’t see it this way, because he has paid handsomely for the right not to. Of course, Detroit has plenty of skin in the game too—they’ll spend the next 30 years forking over $324 million for the Pistons and Red Wings’ new arena—but that doesn’t really count. Being rich is the ability to make the world match your misapprehension of it.

Owners, governors, demi-tyrants—whatever name we’re giving them, they never steal into town. It’s a big deal when the deed to the franchise changes hands. That familiar pomp bloomed in March of 2004, when Steve Belkin, Bruce Levenson, and a Randian potpourri of minority investors finalized their purchase of the Hawks from Time Warner, but it was a relatively quiet deal, given that the Hawks were not a powerhouse and Atlanta is not a basketball town. The team sucked, still struggling to find a meaningful direction after Steve Smith and Mookie Blaylock aged out of their primes and left the franchise in the late 90s. The fans, dispirited by years of lousy squads and perhaps not particularly interested in the first place, were hardly showing up at all, as the Hawks ranked dead last in attendance.

The benefit of buying a team that’s been miserable for a while is that you can promise things will get better and there’s a good chance you’re going to be right. Belkin, Levenson, and company swept in with a bold and then-somewhat novel vision that’s old hat to anyone who’s familiar with modern front office strategizing: the Hawks were bottoming out. Of course, they didn’t say this explicitly, but shortly after they committed to purchasing the franchise in September of 2003, they instructed general manager Billy Knight to spend the season shipping off talent for whatever cut-rate price he could get.

“We gave [him] a basketball strategy statement on what we hoped to do, and one of our main objectives was to have a lot of flexibility,” Belkin told SI. So Knight cleared the decks. Glenn Robinson, Shareef Abdur-Rahim, and Theo Ratliff were sent away. Rasheed Wallace came aboard for exactly one game before getting hot-potatoed him to Detroit. The return on this flurry of moves was modest: the Hawks got the 17th pick in the 2004 draft and a bunch of expiring contracts. Sources that definitely emanated from within the crowded owners’ suite suggested they would use their cap space to take a run at free-agent-to-be Kobe Bryant over the summer. That was about as unconvincing a false hope story as has ever been fabricated.

“We feel the most important thing is to create a championship caliber team,” Belkin said in a chat on ESPN.com. “That may take a while to build, but our team will play hard and play some entertaining basketball.” That last part wasn’t remotely true; it wasn’t possible with the players they were putting on the court. Atlanta rolled into the 2004-05 season with a starting lineup of Antoine Walker, Al Harrington, Boris Diaw, a 34-year-old Kenny Anderson, and someone named Jason Collier. A young Josh Smith came off the bench. They lost their first four games by a combined 81 points and finished with comfortably the worst record in the league.

For a while, matters improved incrementally, in ways you could barely notice. Management tried to shift into second gear, but they hamstrung themselves with less than spectacular lottery selections: Josh Childress in 2004 (over Luol Deng and Andre Iguodala), Marvin Williams in 2005 (over Deron Williams and Chris Paul), Shelden Williams in 2006 (over Brandon Roy). Their 2005 signing of Joe Johnson was a solid one, and Josh Smith was developing into an impressive force, but the project didn’t start to come together until 2007, when Billy Knight finally hit on a high draft pick with an immediately NBA-ready Al Horford. The team wasn’t great, but Johnson was a minor star, and Smith, Williams, Horford, Josh Childress, and Mike Bibby rounded out a fun if very of-its-record 37-and-45 squad.

It’s difficult to recall when people were excited about the Hawks, because it was a brief moment confined to a niche of the NBA-watching world, and history slathered beige paint over that luminescent spot as the franchise quickly became synonymous with dour second-round playoff exits. But dammit: they almost beat the eventual champion Boston Celtics in the one-eight matchup, or anyway, they were one not-abysmal away performance from being close. They got walloped in all four games in Boston, but at home they played with a combination of chaotic, vet-flummoxing youthful energy and just enough assuredness to overwhelm the Celtics. It would be a stretch—read: incorrect—to say that a 21-year-old Al Horford outplayed Kevin Garnett, who was a decade Horford’s senior, but you could imagine a time when he would. That’s not nothing, especially for a franchise that was enjoying its first postseason appearance of the toddling century.

This illusion didn’t fall apart, but it was swiftly realized in the most boring way possible. Childress left the NBA for a mega-deal in Greece and the guys who stayed behind constituted a solid but uninspiring core. Johnson had no pulse, Horford grew into a beyond-the-box-score kind of player, and Josh Smith was deeply cool but perhaps ultimately—if we sigh and look at the numbers—counterproductive player. That series against Boston was the era’s peak, both for what it was and the more interesting than actual future it suggested. After four straight straight seasons of finishing somewhere between third and fifth in the East, Johnson fled for Brooklyn. Smith followed him out the door the following summer.

Horford stuck around and became the centerpiece of Mike Budenholzer’s regular season dynamos, but this was after our once-ambitious owners were already kaputt. Steve Belkin and his Boston-area investors got bought out by Levenson and company in 2010, and then Levenson was forced to put the team up for sale right before the 2014-15 season for sending an astoundingly racist email that framed the predominantly black crowds in the predominantly black city in which the Hawks played as a problem: “my theory is that the black crowd scared away the whites and there are simply not enough affluent black fans to build a signficant [sic] season ticket base.”

Atlanta Journal-Constitution writer Jeff Schultz’s good riddance about Levenson leaving town: “The way people view [the email] now is, on the one hand it’s another bad Hawks story that people will probably be upset over and there will probably be some disappointment, too. On the flip side, if it ultimately means that Levenson and several partners are leaving, people are okay with that. It’s like hitting the reset button.”

So, in a little over a decade, Levenson and company made Atlanta fans sick of them. That’s an accomplishment, of sorts.

What are you supposed to say, when you put yourself in charge of a franchise, other than that you’re going to take them to the top? It’s salesmanship, but as is often the case with the ultra-rich, it’s also self-delusion. These are curious people, lunatic-confident and drunk on success in a completely unrelated field. They arrive making grand promises, because they’re smarter than everyone else, they must be, why else would they have all this money? And then when the promise falls flat, as it assuredly will, they make money out of the deal anyway, so they can tell themselves they’re still very smart.

It’s funny, because the Hawks didn’t do poorly under Belkin and Levenson. They put together a few decent seasons. But there was a ricketiness to the entire enterprise and the on-court product was steeped, somehow almost immediately, in sour, doomed competence. It’s in a sport fan’s nature to dream, but we don’t need to heed the visions provided by the affluent interlopers who run our favorite teams. One is pure and one is a pitch, and what truly matters anyway is not what’s to come, but what you’re watching right now, and how that makes you feel. You can trust that, because nobody else can own it.