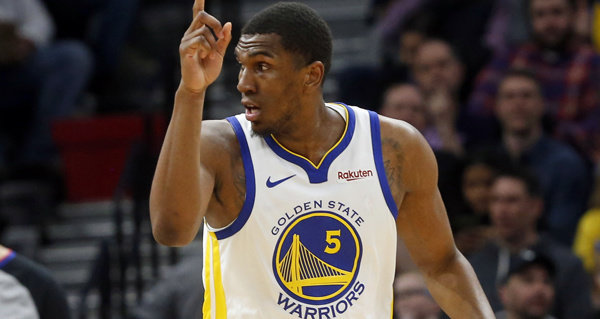 Looney averaged 3.4 points and 3.3 rebounds in 20 games last season for the Warriors.

Share Tweet Discuss Feedback
Marquese Chriss On The Warriors Potentially Drafting James Wiseman: I'll Play 'Whatever Role I Have To'

Marquese Chriss discussed the possibility of the Golden State Warriors drafting James Wiseman, saying that he was prepared to play any role on a winning team.

“I’m just thankful to have an organization that believes in me. At the end of the day, if they do draft (Wiseman), I know they’re making the best decision that they can for this team and that they feel will be beneficial for us to win a championship," Chriss told Connor Letourneau of the San Francisco Chronicle.

“As a team player, I want to win and I want to be a part of the team. Whatever role I have to have to make that happen, I’ll take on," he added.

The 22-year-old Chriss averaged 9.3 points and 6.2 rebounds for the Warriors last season.

Chriss is signed through the 2021 season.

The five-year, fixed-rate and interest-only loan will refinance around $314.6 million of existing debt, pay upfront reserves and closing costs and return roughly $202.3 million in equity to the sponsors, according to Fitch Ratings, which analyzed the transaction.

The Warriors and Uber each have 45 percent interests in the joint venture.

Bob Myers and Steve Kerr said they could both relate to The Last Dance, and discussed how exhausted they were after the Golden State Warriors won the 2018 NBA title.

"The second time with Kevin [in 2018] it felt like, 'Well, we just did what we were supposed to do, and great job. It wasn't joy. I'm sure a lot of people felt differently. It wasn't anybody's fault. I think there's just a weight to everything. And so I'm sure [the Bulls] felt that weight of everything, weight of relationships," said Myers.

The Warriors swept the Cavs in the NBA Finals as the team won its third title in four years.

"To be honest, [the documentary] is just confirmation of what I was saying to our team all of last year and 2018. The whole messaging for the year was based on my experience with Chicago and feeling that level of fatigue [and] emotional toll that had been over the previous four years," added Kerr.

Myers added that maintaining positive relationships was the most difficult aspect of that season.

"Winning and doing it all together is really hard. And maintaining relationships is hard. ... There's a lot more ways for it to come apart than keep it together."

Mark Stevens will return to his full, active status as a stakeholder of the Golden State Warriors and will also return to the team's exeuctive board.

Stevens shoved and screamed at Kyle Lowry during Game 3 of last season's Finals when Lowry crashed into the first row.

Stevens was not allowed to attend games or team functions as part of a suspension for the entire 19-20 season.

Stevens owns between two to 10 percent of the franchise.

Mark Jackson said that he would do more to communicate with the general manager and owner should he get an opportunity to coach again.

Jackson has been rumored with the Nets and Knicks coaching positions.

"I was a guy that always was told to stay in your place. So as a coach (with the Warriors), I wasn't trying to get in the business of the general manager or the ownership ... So I think the relationships of general managers and ownership (is something I'd take a different approach with). And I have a great relationship with (Warriors GM) Bob Myers. There's no question about that. Forget about what you heard.

Do me a favor: on the record ask Bob Myers what he thinks of Mark Jackson. On the record, not behind the scenes, ask (Warriors owner) Joe Lacob about the relationship that I had with him. So I wouldn't say better relationships, I would say more dialogue across the board," said Jackson on First Take this week.

Jackson reportedly wanted to add Jeff Van Gundy to the coaching staff when he was with the Warriors.

Jackson also defended himself on the role he had in developing the Warriors' core.

"The fact is we were a top five defense over the course of that tenure and we were a top 10 offense when it was all said and done. You have to understand - and these guys will admit it - the Steph Currys, the Klay Thompsons, the Draymond Greens: the team that I had are not the same individuals (that they were when I coached them). They look the same, and they're the same people, but they're not the same players that they were when I first got ahold of them."

Bob Myers said that the Golden State Warriors will continue to play hard despite having the worst record in the league if the season were to resume.

"The truth is we have the worst record in the league. That's a fact. It's hard to motivate in our unique position. But that doesn't mean players don't have pride and won't come back and play and care about the league as a whole. We want to be good partners and we will be good partners," said Myers.

Steve Kerr had said in late April that the Warriors were already in off-season mode.

Myers added that he wanted to see how Steph Curry and Andrew Wiggins would mesh on the court.

"We'd like to see Steph [Curry] play with [Andrew] Wiggins; I think we got to see that for one game where we were hoping to see that."

Bob Myers said the Golden State Warriors plan on being "good partners" if the NBA resumes the 19-20 regular season and teams without a mathematical chance of making the playoffs are called back to play games.

Steve Kerr made controversial comments on April 28th indicating the Warriors were operating as though their season was already over despite 17 games remaining on the schedule.

"It feels like the offseason," Kerr said then, mentioning a Zoom call he and Myers had with the players. "... It was just a chance to check in, but it was also a chance for Bob to update the players on his contact with the league and the latest news, but it also kind of felt like our annual team exit meeting. Our coaching staff has been undergoing staff evaluations, offseason plans, so we are absolutely in offseason mode right now."

"The truth is we have the worst record in the league. That's a fact," Myers said. "It's hard to motivate in our unique position. But that doesn't mean players don't have pride and won't come back and play and care about the league as a whole. We want to be good partners and we will be good partners.

"We'd like to see Steph [Curry] play with [Andrew] Wiggins; I think we got to see that for one game where we were hoping to see that."

The Golden State Warriors have been preparing for years to pursue Giannis Antetokounmpo, according to a source. The Warriors similarly planned for multiple years to pursue Kevin Durant as a free agent in 2016.

Antetokounmpo can sign a supermax extension with the Bucks in 2020, or opt for free agency in 2021.

League sources also believe Antetokounmpo would want to leave the Bucks if he loses confidence in the franchise's capacity to win championships. The Bucks had the NBA's best record when the season was suspended in March.

The Warriors' best chance of acquiring Antetokounmpo would likely come through a trade.

ESPN’s Ramona Shelburne said on “The Jump” in September that Golden State has “always been the big threat” to the Bucks in the Antetokounmpo sweepstakes.

Steve Kerr admitted that the Golden State Warriors are operating as if their season is over. The Warriors have long been out of playoff contention with a league-worst 15-50 record.

"It feels like the offseason," Kerr said during a Zoom conference call in conjunction with the University of San Francisco on Tuesday. "And, in fact, we had a Zoom call, Bob Myers and I got on a Zoom with our players, our whole roster last week. And it was just a chance to check in, but it was also a chance for Bob to update the players on his contact with the league and the latest news, but it also kind of felt like our annual team exit meeting. Our coaching staff and I have been undergoing staff evaluations, offseason plans, so we are absolutely in offseason mode right now."

The Warriors remain in communication with their players and staffers but aren't preoccupied with a possible resumption of the season.

"The suspension came at an interesting time, and it really made a difference, depending on where your team stood in the standings," Kerr said. "So I've talked to some of my fellow coaches who are coaching teams that are right in the thick of the playoff hunt. They're trying desperately to stay in touch with their team, some of them are even doing group workouts on Zoom with their training staff, and they're trying to find hoops for their players to shoot at where they're able to do so.

"It's different for us because we were down to 17 games, but we were out of the playoffs. It feels like the end of the season for our team. It just does. We don't know anything officially. There's still a chance the league could ask us to come back and play some games, but given what we went through this season, with all the injuries and the tough record, it's been more of the case of we're staying in touch with guys, but everybody is just sort of assuming that this is kind of it. We're not going to be involved much anymore."

Warriors To Host Nets At Chase Center Without Fans In Attendance

Steph Curry Expected To Play On Thursday, Draymond Green 'Getting Closer' To Return

Joe Lacob: Warriors Have Much More Revenue Than Knicks, Lakers

Kevon Looney Out At least 3 Weeks With Hip Injury