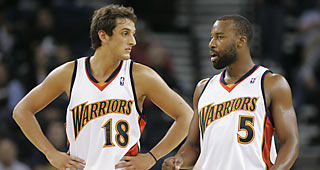 Rookie guard Marco Belinelli said he would welcome minutes at the point but acknowledged the team would be best if it were just a handful at a time.

"About 10 minutes," Belinelli said. "Coming up, playing in Italy, I always played point guard. But I need work."

He said the coaches have told him they like him at point because he has their desired size. At 6-foot-5, 192 pounds, Belinelli can see and shoot over most opposing point guards. 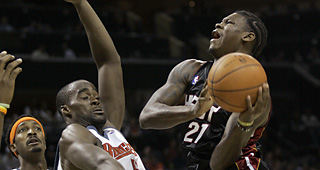 There appears to be no shortage of potential destinations for Miami's Smush Parker, who Pat Riley confirmed has been shopped in trades in recent weeks.

Cleveland, Boston, Houston and Golden State are believed to be among the teams the Heat has talked with regarding a deal. Parker has missed the past 18 games since his Nov. 27 altercation with a female valet attendant at a Miami condo. 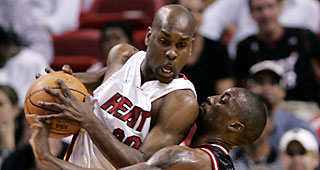 Gary Payton is 50-50 to play again, said Goodwin, who is also his agent. The Warriors still hold an appeal for the Oakland native who lives in Las Vegas, and Golden State might search for a backcourt insurance policy with news that a hip injury might force Troy Hudson, signed in the summer to play behind Baron Davis, to retire. 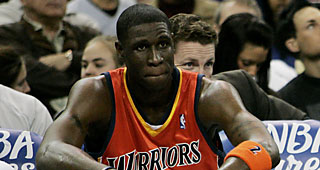 Warriors' forward Mickael Pietrus spent much of this summer waiting for a trade that would deliver him from Oakland. It didn't happen, obviously, but beginning this week, that possibility will be once again in play.

After signing Pietrus to a one-year qualifying offer worth $3.47 million, the Warriors have been prohibited from dealing him for three months -- a limitation that ends Tuesday.

While both sides said they're not actively seeking a divorce, there is no doubt that Pietrus would still like to wind up with a team where he'll get more consistent playing time. And it's equally clear that the Warriors are open to the idea of dealing their longest-tenured player.

"If a trade is offered, I'll go," said Pietrus, who has the right to veto any deal because he would have to relinquish his "Larry Bird rights," potentially costing himself money on the free agent market next summer. "I'll give up my 'Bird rights' for 35 minutes (per game)." 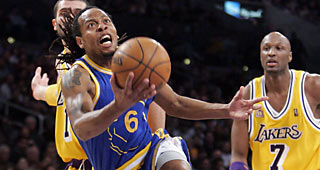 The Warriors signed Troy Hudson on Sept. 24 to a one-year deal worth the league minimum of $1.2 million as a backup to Baron Davis. With 15 players on the roster, the Warriors would have to create room for another point guard. One possibility is to waive center DJ Mbenga, whose contract won't be guaranteed until Jan. 10. Another is to cut loose Hudson. 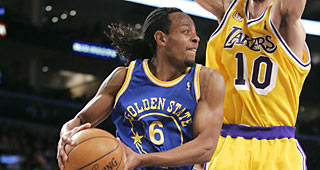 Hudson said he will undergo surgery shortly after Jan.1 to repair a small tear in the labrum of his left hip. The exact date and choice of surgeon have yet to be finalized because some offices have been closed for the holiday season.

The typical recovery time for such a procedure is three to four months, Hudson said, which would put him on the shelf at least until the first week of April, when only two weeks remain in the NBA's regular season.

Hudson first showed signs of the injury in early November and has not played since Dec. 12 Up to then he was totaling 94 minutes in nine games with averages of 3.1 points, 1.0 assists and 0.8 rebounds per game. The 31-year-old sought a second opinion from a specialist in the New York area last week, and that meeting ? which confirmed the initial findings of Warriors' team doctors ? was enough to convince him surgery was necessary. 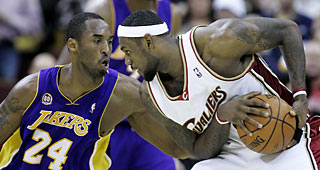 The Cleveland Cavaliers are a team in disarray.

A 105-96 loss to the Golden State Warriors on Sunday night was their 10th in 13 games and was met with a chorus of boos from fans of the defending Eastern Conference champions.

The latest loss, in which the Cavaliers never led and trailed by 28 points in the third quarter, was so bad LeBron James left the arena without talking to reporters.

It was also another frustrating night for Cleveland Coach Mike Brown, who has been pleading with his team to play with more intensity.

"In the first and third quarters we came out with no energy at all," he said.

Guard Troy Hudson's lingering hip condition has the Warriors concerned that his NBA career could be over.

"I think Troy's probably done," Coach Don Nelson said after Tuesday's shootaround. "I don't think he'll play again. I'm serious. It's unfortunate, but he has a hip problem, and I haven't heard a second opinion. But it doesn't look good for him."

"He's going to have to have a new hip as he gets older, but we're quite concerned about him being able to play again. Right now, we're talking maybe four to six weeks off and then check again. But he has some spurs on his hip and arthritic conditions, and it's just not a positive for him."

Hudson, 31, has played in just nine games this season after his hip condition surfaced in training camp. An MRI taken last month showed bone spurs in both joints and inflammation on the left side which is where his pain is located. 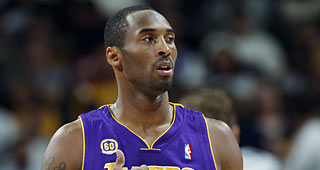 Baron Davis put his usual game-breaking flair on the decisive 3-pointer with 16.8 seconds to play, and Golden State roared from behind in the final minutes to snap a nine-game losing streak to the L.A. Lakers with a 108-106 victory Friday night.

Davis had eight of his 22 points and a remarkable assist in the final 3:19 for the Warriors, who fed off of a playoff-worthy sellout crowd of more than 20,000 fans in yellow T-shirts to beat Los Angeles for just the second time in 16 meetings.

Bryant scored 21 points for the Lakers before injuring his quadriceps or groin with about 2? minutes to play, forcing him to sit out the two possessions in which the Warriors rallied.

``We kept our composure. We kept fighting in that huddle,'' Davis said while scrolling through congratulatory e-mails at his locker. ``We stuck together when things weren't going great. That's huge for us.'' 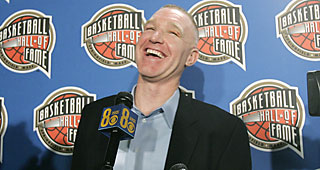 Despite the lure of running his beloved, hometown Knicks, Warrior GM Chris Mullin recently told confidants he's leery of working for the moribund franchise, feeling it could be too big a task to turn around.

The Post reported exclusively during Thanksgiving week a Knicks intermediary casually gauged his interest in the Knick GM job if it became available this offseason while he attended Nov. 20's Warrior-Knick game.

With the sexual-harassment suit officially settled yesterday, Thomas could be as vulnerable as ever come spring if the Knicks are out of the playoff hunt and franchise center Eddy Curry continues his regression.

The Post reported that, in a postgame meeting Saturday night, owner James Dolan told Thomas his job is not in jeopardy.

During his five-day visit to New York that week, Mullin told multiple confidants about the informal conversation with a Knick intermediary.

According to two sources who spoke to Mullin, he likes his image in New York the way it is and would be afraid an unsuccessful run as GM would "destroy" it.

Howard And Jackson Named Players Of The Week

Warriors' Pietrus Taken To Hospital With Facial Injury
Mickael Pietrus left the Warriors' game Sunday night against the SuperSonics after taking an elbow to the face, and was taken to a hospital for further examination.