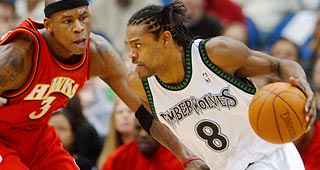 The reason a lot of inspirational fiction, even Based On A True Story joints, falls flat is that the redemption arc feels somehow contrived. Usually, that’s because the success waiting for the characters on the other end of their trauma or life-altering mistakes is hilariously grand. And then he became the greatest composer of his generation. And then, together and with a perfect understanding of each other’s humanity, they solved racism. Get the hell out of here with that stuff. Even when it’s factual, it doesn’t scan that way. Imperfect victories, lasting failures, unsatisfying left turns, stupid nothing that seems like it might stretch on forever—this is what most people’s lives are made of, and what they can more readily relate to. Or at least that’s how I see it.

For most of his career, Latrell Sprewell was described as an alienating figure. This was well-founded, to an extent. He was authentically a moody and sometimes terrifyingly angry guy. He got into it with coaches and other players. He once tried to attack a teammate with a two-by-four. Most famously, he assaulted P.J. Carlesimo, pinning him to the practice court floor and choking him. You can read about his lunacy in more depth in the Warriors entry of this series.

But there was another dimension to Spree’s public persona that felt unfair even amidst his erratic and sometimes downright condemnable behavior. It was the sense that the press feared and resented him. It’s a tone thing; you know it when you hear it, or read it below the byline of some aging white sportswriter: those cornrows, he plays with such rage, etc. Sprewell felt this, and he understood it. He said that images of him in media were “always a picture of me looking mad or being aggressive. I never saw pictures of myself where I had a smile on my face. It was always negative.” Put bluntly, Spree was portrayed as a Big Scary Black Guy. The whole vibe around him—the one he emanated and the one others constructed—was rancid.

In the aftermath of the Carlesimo incident, he was jettisoned from Oakland and landed on Jeff Van Gundy’s Knicks, playing bench minutes for the 1999 team that improbably made the Finals and excelling for a couple seasons after that. But his career eventually stalled in New York, as poor front office decisions and aging talent condemned the Knicks to a spell of familiar mediocrity. Though Spree put up decent stats and played typically great defense when the team wasn’t getting blown out, he was toiling in purgatory.

And then a wonderful opportunity appeared: the Knicks traded him to the Timberwolves. This was the summer of 2003. Kevin Garnett was 27 years old, in the thick of his prime, when he was as good as any player in the league, and after failing to maximize Garnett’s talent for too long, the Wolves were finally taking bold steps to get him proper running mates. They swung a deal for Sam Cassell and Ervin Johnson in June and picked up Spree in a complicated four-teamer a month later. This wasn’t a move for the future. Latrell was 33 and Cassell was 34. But they were borderline stars, and this was an era when one MVP candidate and two more-than-solid players could get you places. Plus, Spree and Sam had spent the last couple seasons on mediocre squads. There was a chance they might come alive if the level of competition jumped up a couple notches.

“Latrell gives us a very athletic swing player, something that we have said since the end of last season that we needed,” Kevin McHale told reporters shortly after the trade was announced. “He will give us a tremendous defensive effort every time he steps on the court.” For perhaps the only offseason in his gaffe-filled career as Minnesota GM, McHale was absolutely correct. With Sprewell on the perimeter and Garnett in the paint, the Wolves were terrifically difficult to score against, posting the sixth-best defensive rating in the league in 2003-04. They could put the ball through the basket too. (Flip Saunders never really got enough credit for being a smart offensive coach.) Spree was his usual inefficient self, but Garnett and Cassell made up for his chucking ways, and together, they composed the most well-balanced attack in the league.

Perhaps most importantly, the three Wolves had similar personalities. They were deeply intense dudes, and though they would snap at each other occasionally, they got along well and their ferociousness kept everybody else on the roster engaged. If there was ever an example of Latrell Sprewell contributing positively to a team’s culture, it was on this particular team. “You take Spree’s emotions, my emotion, Big Ticket’s emotions and stuff all that together,” Cassell told SI in February of 2004. “It’s the atom bomb.”

The Wolves won 58 games that year, the best record in the Western Conference, above Tim Duncan’s Spurs and Kobe and Shaq’s Lakers. They were soaring. “Spree and Sam have made the game easier for me, just knowing you have different weapons for combat," Garnett said in that same SI story. "When I think of slashers I think of James Posey and Vince Carter. 'Trell is right there with them.”

All that positive energy didn’t quite culminate in the ending everybody hoped for. The Lakers got a smidgen more organized than they had been in the regular season, Sam Cassell’s back went on the fritz, and L.A. took the Wolves out in six games in the Western Finals. Even without Cassell, Minnesota didn’t accept defeat meekly in Game 6. The Lakers only pulled away in the fourth quarter, as the thin Wolves squad ran out of breath. Sprewell, for what it’s worth, narrowly outplayed Kobe Bryant, putting up 27 points on 22 shots while holding his assignment to 20 points on 17 attempts.

Unsurprisingly, the Wolves didn’t build upon or even repeat their success the following year. That’s the sort of thing that happens when you go all in with aging vets. Spree spent the offseason in a contract extension dispute, whinging uncharismatically about needing to feed his family. The situation didn’t go to hell; it just predictably deteriorated. Minnesota missed the playoffs. Sam Cassell left for the Clippers and Spree was out of the league, due more to principle than ability. He wouldn’t take a low-paying deal, and teams weren’t interested in giving him anything more than that.

It was a dismal end to a messy career, but one that had its moments, and specifically had one that surpassed all the others. Redemption, you might call it—less than total and fleeting and validating and warm. Amid everything else, Latrell Sprewell had one really good year in Minnesota. He was happy and valued, near the top of his game at the right moment. I’d give a lot for one really good year. Maybe you would too, and maybe you can find one. It’s something that might not be beyond you, something you might be able to work for, luck into, and enjoy—and return to the power of its bright meaning even after it’s over.