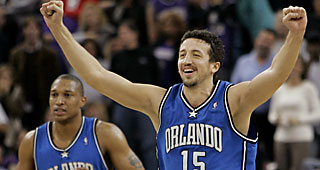 Magic General Manager Otis Smith said he has essentially made it known throughout the league that he has no interest in acquiring troubled players or players with suspect character.

"I think I've pretty much gotten that out there," Smith said.

Smith was not interested in Allen Iverson, and he said the Sacramento Kings -- who are apparently looking to trade controversial forward Ron Artest -- did not contact the Magic.

Smith said he would not have had any interest in dealing Hedo Turkoglu for Artest. Their salaries come close to matching. Turkoglu played his first three NBA seasons with Kings. 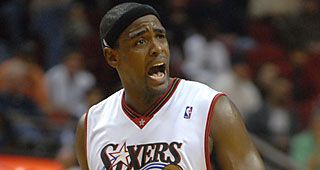 Chris Webber's days in Philadelphia, according to team sources, may soon be winding down.

He has become a big distraction in the locker room by reportedly lawyering younger players.

A buyout is not beyond the realm of possibility. 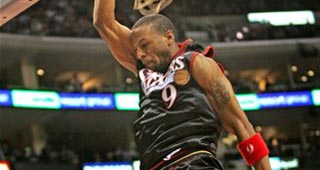 The 76ers said goodbye to Allen Iverson and their 12-game losing streak all on the same night.

Andre Iguodala scored a career-high 31 points and had nine assists to help Philadelphia beat Boston 98-83 on Friday night, just hours after the trade of their troubled superstar became official.

"It's a relief," said Samuel Dalembert, who had 14 points and 12 rebounds to help the Sixers to their first victory since beating Chicago on Nov. 24. "It's like carrying a big bag of potatoes, man, for a long time. It was crazy." 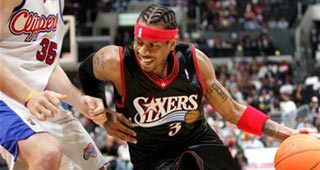 Allen Iverson was on his way to Denver to join the Nuggets for his debut tonight, but a few obstacles stood in his way: airport trouble, snow-covered roads and conditions of the trade involving the four-time scoring champion.

"We really don't know," said Mark Warkentien, Denver's vice president of basketball operations. "There are still a lot of variables."

Iverson's plane was supposed to touch down in Denver three hours before tipoff in the game against the Sacramento Kings.

Iverson still has to undergo a physical and Andre Miller and Joe Smith have to report to Philadelphia and take physicals as well. Ivan McFarlin, who was also acquired by Denver in the trade Tuesday with the 76ers, doesn't factor into the equation since Denver has waived the physical requirements for him.

"Hypothetically, if A.I. and Andre pass their physicals and Joe doesn't, nobody can play," Warkentien said.

There's a time limit as well. Iverson has to report and clear his physical an hour before the game. That's when the active roster is due.

However, the game time may be pushed back since Sacramento is having trouble arriving into town. Denver International Airport has been closed the last two days due to a blizzard, and just recently reopened today. 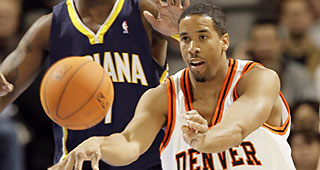 Sixers president and GM Billy King will brainstorm with 'consigliore' Larry Brown to reroute Andre Miller to a playoff contender. The thinking is that it would be to move the point guard a half season early than a half season late.

The longer Miller remains with a loser, the less productive and motivated (as his one-year Clippers' tour attests, though it's not necessarily reflected in his stats) is bound to become. 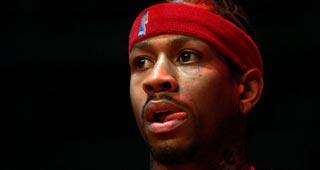 The Denver Nuggets have issued a press release on the status of their new superstar, Allen Iverson.

Iverson is expected to fly to Denver during the day tomorrow.

Andre Miller has not been unable to get to Philadelphia from Denver but is expected to fly there tomorrow.

The trade and player availability for tomorrow night's games are still contigent all players reporting and passing physicals. 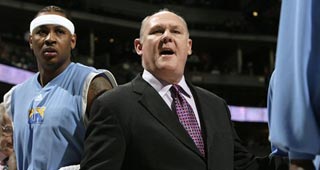 McFarlin has a nonguaranteed contract, and his agent, Lance Young, told the Rocky Mountain News on Wednesday that he will be waived and will not report to Denver. 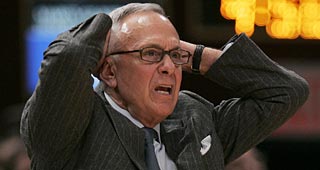 Larry Brown may be back with the 76ers now that Allen Iverson is gone.

Already acting as an unofficial adviser to the Philadelphia 76ers and team president Billy King, Brown could formally return to the organization he led to the 2001 NBA Finals.

"We will certainly continue to talk, but at this point, we are not sure if anything official will come of it," King said in an e-mail to The Associated Press on Wednesday night.

Brown's agent, Joe Glass, indicated in a brief interview that Brown could return to Philadelphia. 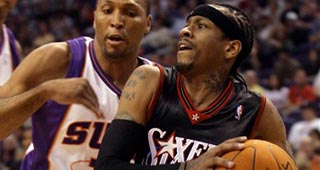 Allen Iverson spoke with ESPN's Stephen A. Smith on Wednesday in his first interview since being traded to Denver.

"It's a great feeling. I'm just glad the whole process is over. I think I'm just put in a situation where I can succeed."

Iverson later added that he did not request a trade out of Philadelphia.

"I went into a meeting with Billy and I had expressed my frustrations," Iverson said. "We had lost 12 of 14 games and something wasn't right. I told Billy King we couldn't win with this style. I didn't directly say, 'Trade me -- I'm ready to go.'"

Philadelphia will remain a place that was very special for Iverson.

"I love my fans in Philadelphia, but this is the hardest place in the world to play in," Iverson said. "And I think it's the hardest place to play in to be a superstar. Just to be the No. 1 guy. All eyes on you -- because everybody wants you to be perfect, but not themselves." 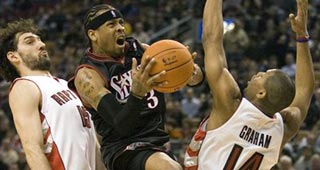 Allen Iverson and Ivan McFarlin were dealt to Denver for Joe Smith, Andre Miller and two 2007 1st round draft picks (Dallas and Denver's).

The Nuggets' own pick is believed to be number one protected, according to a source, while no protection will be on the Mavericks' pick.

He reportedly has a 50% chance of being ready to make his debut in a Nuggets' uniform on Wednesday at the Pepsi Center versus Phoenix.

DerMarr Johnson currently wears the #3 for Denver and there is no word yet on whether that number will be relinquished or what number Iverson will wear.

Philadelphia selected Iverson with the first overall pick in the 1996 draft and the All-Star guard led the franchise to the NBA Finals in 2001.

Report: Iverson Traded To Denver
According to NBA front-office sources, the Denver Nuggets have reached an agreement in principle with the Philadelphia 76ers to acquire Allen Iverson.

Iverson To Remain A Sixer Until Around All-Star Weekend?
It's possible Iverson might not be moved until around the Feb. 18 All-Star Game, according to a recent report

Warriors Out Of Iverson Sweepstakes

Source: Iverson To Denver Deal Close
NBA league sources say that the Denver Nuggets are close to a deal that would land Allen Iverson.

Raptors Trying To Facilitate Multi-Team Iverson Deal
Since the Raptors have about $2 million in cap space, the club has been trying to involve themselves in the Allen Iverson trade talks.

Boston Never Made Offer For Iverson?

Early Returns For 2007 NBA All-Star Voting Are In
NBA fans from around the globe are responsible for voting in the starters for the NBA All-Star Game, to be played in Las Vegas on February 18.

Nuggets Working On A Three-Way?
The proposed trade would send forward Nene to the Trail Blazers, who then would ship center Jamaal Magloire to the Sixers, with Denver getting Allen Iverson.

Warriors Appear Out Of The A.I. Market