The NBA fined Marquese Chriss $35,000 for shoving Luka Doncic during the third quarter of a recent Dallas Mavericks' 141-121 win over the Golden State Warriors.

The league said that the fine was partly "based in part on the fact that Chriss has been disciplined on several prior occasions for physical altercations on the court."

Doncic appeared unconcerned by the shove, chalking it up to "just physical plays."

The Golden State Warriors are monitoring the situation of Karl-Anthony Towns with the Minnesota Timberwolves.

Towns is under contract until 23-24, but multiple executives at the G League Showcase relayed that he is unhappy. Towns signed his extension with the Wolves during the 2018 offseason.

The Wolves have had interest in pairing Towns with D'Angelo Russell as the two are known to be close friends.

The team is looking for future assets in return for a veteran player.

Damion Lee and Ky Bowman are coming up on their limit for two-way deals, which could add extra urgency in trading Burks.

Lee and Bowman have 12 and 11 days remaining as NBA players on their two-way deals.

Draymond Green gave credit to the Golden State Warriors' defense for setting the tone following their 105-96 win over the Phoenix Suns.

The Warriors have the best defensive rating in the league since December 19th with 97.6 points allowed per 100 possessions.

Green added that he's focused on the team's improvement despite having just 9 wins on the season.

"We still got nine wins. Ain't no pressure. We still go out there and swing for the fences. This team is just really getting better, and it's exciting." 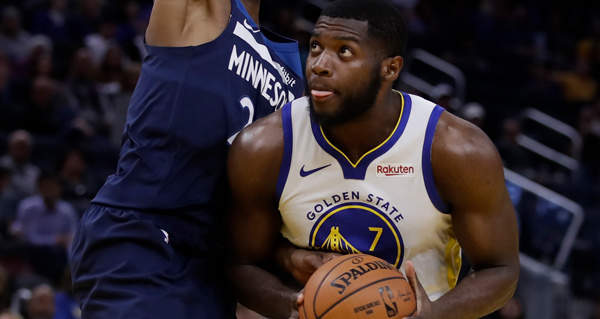 An MRI on Eric Paschall's knee returned clean, though he remains questionable for the Golden State Warriors' Monday night game against the Minnesota Timberwolves.

Paschall injured his knee on Friday night against the Pelicans.

"It's just been a tough couple of weeks for Eric. I don't know that he needs a week off, he's just had a week off from the [hip] injury. And we got really good news [Saturday] with the MRI and the evaluations, so he fully practiced today, and he's anxious to get back out there. Questionable for tomorrow, we'll see how he's doing, but all in all I'm just thrilled that he's not seriously injured," said Steve Kerr.

Steph Curry rejoined the Golden State Warriors and has started working on his lateral movement and jumping, according to Steve Kerr.

"He's been doing basketball movements. He hasn't been shooting the ball, but he's been out on the floor doing a lot of lateral movement, jumping, that kind of stuff," said Kerr.

Curry was expected to be re-evaluated 3 months after undergoing surgery on his broken hand on November 1st. That timeline has yet to change.

Kerr added that the next step will be for Curry to travel to the team.

"We'd like to have him with the team as much as possible. I haven't talked to him about our next trip, but I'm sure he'll be around the team more and more now that he's allowed to be up here with our staff."

Eric Paschall injured his right knee in the first quarter of the Golden State Warriors' 106-102 win over the New Orleans Pelicans.

Paschall stayed in the game, but was taken out and did not return.

"He's having his right knee evaluated. I'm not sure [about an MRI]. He wasn't in the locker room. The training staff took him and he was getting it evaluated, so I don't know what that means," said Steve Kerr after the game.

Paschall is averaging 15.9 points and 5.0 rebounds on the season.

The Warriors play the Timberwolves on Monday.

ESPN will not longer televise Friday's game between the Golden State Warriors and New Orleans Pelicans.

The game was considered a marquee matchup due to a potential meeting between Steph Curry and Zion Williamson.

ESPN are also adding a game between the Lakers and the Mavs on December 29th. 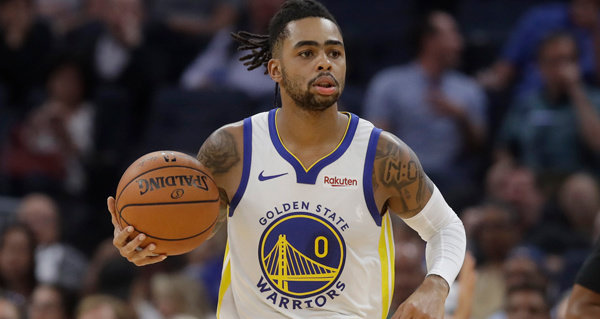 The Golden State Warriors are unlikely to trade D'Angelo Russell during the 19-20 season.

The Warriors could conceivably package Russell and their 2020 first round draft pick for an All-Star in the offseason.

"They're not going to me making calls on D'Angelo Russell," said Adrian Wojnarowski.

The Warriors are also hard capped for the remainder of the season, which would limit what they could do with a trade.

The Golden State Warriors are $6 million away from the tax line and successfully getting below it would save them approximately $10 million this season plus approximately $34 million in repeater tax penalties for 20-21. Golden State's payroll for 20-21 could reach $175 million or more based current estimates.

The Warriors could trade Kevon Looney, who makes $4.4 million then also waive Marquese Chriss before his guarantee date in January and then also unload the $2.1 million contract of Willie Cauley-Stein.

The Warriors have a major financial incentive to clear salary in what has become a "gap season".

Execs Worried Warriors Could 'Load Up' After 'Gap Year'