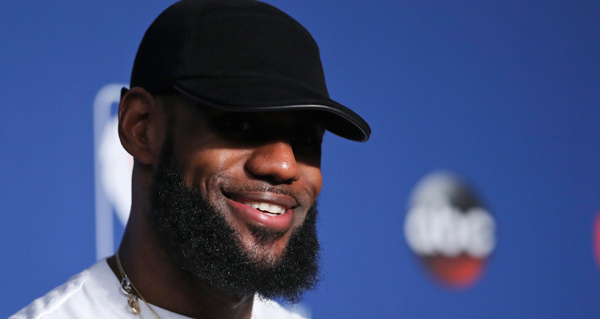 LeBron James came back on his terms. He’d been drafted by Cleveland, which he was happy about but had no say in, re-signed as a restricted free agent, because CBA rules made it financially perilous to do otherwise, and then left for Miami once he was in fuller control of his own labor. At 29, a two-time champ and comfortably the best player in the league, he could do whatever he wanted except sign a contract that paid him what he was worth, and he wanted to bring a championship to northeast Ohio.

But he would do it on his terms. He signed a one-year deal with a player option for an additional season. In concept and execution, this meant he could passively dictate what the front office did every offseason. He remembered in Miami, where he took a slight pay cut and entered into a longer commitment, he was promised that owner Micky Arison would spend every available penny. In what turned out to be LeBron’s last season with the Heat, that didn’t happen. Management amnestied Mike Miller, used a draft pick to unload Joel Anthony’s contract, and didn’t use the mid-level exception. They refrained from pulling all the levers capped out teams with aging stars have to pull to get better at the margins. A capable seventh man can be the difference between winning a title and losing it. LeBron felt betrayed, and a little foolish.

He wasn’t going to get played in Cleveland. LeBron took a max salary, and each summer, he opted out and waited as the front office extended Kevin Love, Iman Shumpert, and Tristan Thompson. His pressure incentivized the front office to trade away draft picks for useful rotation guys like Timofey Mozgov and Kyle Korver. If the Cavs flagged in their efforts to put the best possible team around LeBron, he could walk away. So they kept pushing.

They didn’t give him everything he wanted. In his final year with the Cavs, he urged Koby Altman to use the Nets’ 2018 first round pick, which was sure to end up somewhere in the lottery, to land a player who could help the team immediately. Make a longer-term commitment and we’ll do it, was Altman’s response. He knew the Cavs, who had gotten less than they initially expected out of the Kyrie Irving trade due to Isaiah Thomas’s hip injury, weren’t one piece away from winning another title. LeBron probably knew it too, so he didn’t sign an extension. The Cavs kept the pick, LeBron left for Los Angeles, and that was that.

The lingering effects of LeBron’s influence hamstrung Cleveland for a while after he was gone. (Though nobody put a gun to their head and made them re-sign Kevin Love to a huge contract.) They’ve been in the luxury tax the last two seasons despite being one of the worst teams in the league. But they’re healthy now, if not any good. Altman's predecessor David Griffin was smart to put heavy protections on most of the picks he sent out while LeBron was in town. And whatever, they’re the Cavs: if the greatest player of his generation hadn’t been born just down the road in Akron, he never would have cared to return. Everyone came away from LeBron’s second term basically satisfied, if bruised and emotionally hoarse from the lack of trust on both sides.

When James Harden wanted the Rockets to get rid of Chris Paul and bring in his buddy Russell Westbrook last summer, they scrambled to make it happen. The price was ridiculous: a straight swap of players with Houston sending 2024 and 2026 first-rounders plus pick swaps in 2021 and 2025 to Oklahoma City. Reports on the decision-making process vary, and Daryl Morey claims he wasn’t forced into it, but if you understand what kind of players Morey likes—read: ones who can shoot—and how intensely he values every available asset, it’s hard to believe that he was enthusiastic about the deal. But James wanted it and ownership agreed. So the Rockets pulled the trigger. Just a year later, it’s clear that this was a disastrous move. Morey’s in Philadelphia, Westbrook’s in Washington, and Houston’s down three engines, spooling smoke.

Now Harden wants out too, because he’s 31 years old and the Rockets have no chance to win a championship while he’s still in his prime. He just concluded a brief NFL-style holdout, partying in Vegas while the rest of his teammates were assembled in Houston.

The situation was fraught, which is to say everybody was mad at everybody else. Harden was mad at the Rockets for not trading him to a contender. The Rockets were mad at him for no-showing practice. Executives around the league were mad that any player would make such a power play, because they’re worried about keeping their own stars in check. Fans with half a conscience, even those who support Harden in his dissent, were mad that he was clubbing in the middle of a pandemic. It was a hairy scene.

And there’s still no clean resolution to it. One party’s going to lose face and there will be hurt feelings all around. Harden gets his way and he’s joining the Nets by next week, or he’s brought to heel and does his job. Or he does his job, but he’s openly sulking. The Rockets can try to force him to play, threaten him with fines, but they can’t make him care. Maybe he feigns an injury or gets some minor surgery he’s been putting off. There are many invisible lines still left uncrossed, questions as to who’s got the stomach to pull which bad faith maneuver. Harden’s in the building, and all that means is the argument can now unfold in person.

It seems to me that the player empowerment discussion is a trap, or at least largely beside the point. Is James Harden acting like an entitled jerk? Sure. He’s got a contract; he’s the one who asked the Rockets to make a trade that screwed up their roster and depleted their asset pool. He got what he wanted, and it sucks, so he’s in revolt. Poor, poor James: he’s slated to make $41 million this year playing for a team that isn’t very good.

But there are much broader forces at play. Rotten labor vs. capital dynamics. Though nearly everybody involved in the NBA is rich as hell, and though the players and owners certify a collective bargaining agreement every half-decade or so, the negotiations are, a priori, hopelessly slanted in favor of the owners, because they’re even richer than the players and can wait out longer fallow periods, sustain greater losses, and because they have dominion over their franchises indefinitely whereas players have only a brief window in which they can earn. So in labor fights, owners always get more than they should, which is how they end up with a disproportionate cut of the league’s revenue, and all these tools that keep players underpaid, or tethered to a particular city: the draft and restricted free agency, the rookie contract scale, soft and hard salary caps, maximum salaries, contract length limits, etc. You think they won this stuff because it’s what’s fair? No, it’s because they have more power.

So when Harden, with two more years and a player option left on his deal and being a bit of a brat, demands not to suffer from circumstances he helped create, he’s not exactly correct, in any moral sense, but professional sports is not about morals. It’s big business, legalized and marginally more civil mafia activity. The free market isn’t a college seminar; it’s a demolition derby. Do unto others whatever they don’t have the leverage to stop you from doing.

Unless the players revolt and start a worker-owned league, which they should do but absolutely will not, the Harden-Houston stalemate and conflicts like it are inevitable. Owners will continue to screw the majority of players and a few exceptional older stars will assert their prerogative in ways that are rude and sometimes downright unreasonable. When your entire enterprise is built on a jagged foundation, there’s going to be constant upset and strife.

But here’s a practical solution for an inherently imperfect situation. If you’re the Rockets, and James Harden wants to play with a particular player, but the price for that guy is exorbitant in ways that you fear might damage your prospects well into the future, don’t make the trade. This isn’t an easy thing to do, because it probably means he’s going to leave your organization and go play for a team where the front office does what he says, but you’re unfortunately being given a pair of lousy options: go all in on a bad idea or alienate your franchise player.

The fact is that, when you’re operating within a rickety and inequitable system, there are times when it produces for you nothing but headaches of varying severity. Doesn’t every union know it, when they begin a bargaining session, that they’re about to get socked in the temple. The goal is to win the least painful arrangement, one you can live with. Due to the conditions of the negotiation—the built-in combativeness, decades of accumulated advantages, greed, paranoia, mutual contempt, history as a running list of grievances, all of it as malleable by man as the weather—the agreement that makes everybody happy and whole is never on the table in the first place.